As the editor of Elements magazine, a quarterly business magazine for independent pharmacies published by PBA Health, I’m responsible for the content and quality of the magazine. I also ensure that articles are engaging and informative and fit the magazine’s brand and style.

I served as a contributing writer for the B2B magazine since its inception in June 2012. I also helped plan the concept and mission of the magazine prior to its launch. This included everything from naming the magazine to giving input on the design to setting the departments and the types of content we’d feature.

In September 2014, I was promoted to editor. I now manage a team of contributing writers and am solely responsible for maintaining the print and online content of the magazine.

My other duties as editor include:

If you want to see my work in action, check out all of the back issues of Elements magazine.

Being a magazine editor takes both writing and editing skills.

As an editor, I have to…problem solve.

As the editor of Elements magazine, I’m the problem solver. When my contributing writer can’t crank out any more copy from her interviews but we’re 500 words short, I have to find the copy somewhere.

This problem happened with the feature story on how independent pharmacies can add additional pharmacy locations for the September 2015 issue. So, I found a financing checklist from a bank that serves independent pharmacies (the magazine’s target audience) and I asked if I could use and adapt it for the article. The financing checklist filled the space perfectly and added additional helpful information for readers. 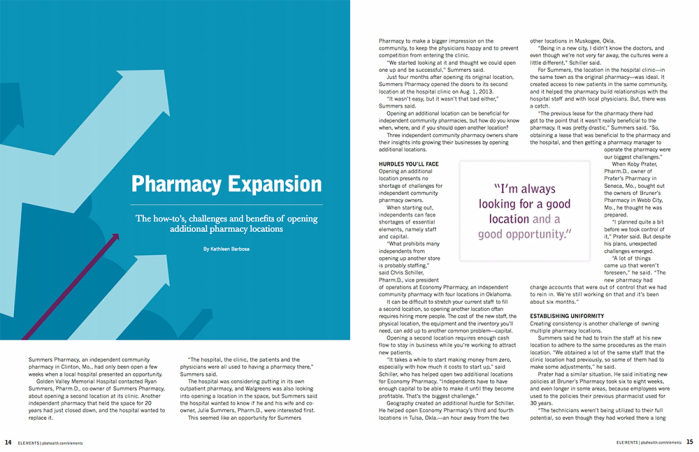 As an editor, I have to…keep the magazine’s voice on brand.

Part of my job as the editor of Elements magazine is to make sure all articles stay on brand.

For this article on wearable technology for the June 2017 issue, my new contributing writer submitted an initial draft written more to an audience of consumers than to the magazine’s target audience of independent pharmacy owners. For example, the headline the writer submitted was “Feeling Sick? Check Your Smartwatch.” With two simple changes, I crafted an appropriate headline for the target audience, “Patients Feeling Sick? Check Their Smartwatch.”

The writer also started the lead sentence with “A recent study found that wearable technology can help detect the onset of illness like the common cold and inflammatory disease.” Pretty boring, huh? I changed it to, “The smartwatch on Mrs. Smith’s wrist could detect when she’s coming down with a cold. At least that’s what a recent study published in PLOS Biology found.” With a few tweaks, I adjusted the lead sentence to not only be more engaging but to also resonate with the magazine’s target audience.

As an editor, I have to…generate ideas.

As the editor of Elements magazine, I’m always on the lookout for article ideas.

Ideas are everywhere. Sometimes all it takes is spinning them in a different way for your target audience.

As a writer, I have to…find multiple sources to make articles come to life.

This feature story on flu shots and why independent community pharmacies need to offer them for the June 2015 issue is one of the best features I wrote for Elements magazine. I wrote it when I worked as a contributing writer before I became the editor. The article incorporates information from varied sources, including a pharmacist at an independent pharmacy, a director of vaccine sales at a vaccine supplier, two experts at a company that ensures pharmacies comply with vaccine regulations and requirements, and a CEO at a company offering a needle-free vaccine product. The variety of sidebars, all of which I came up with and found the content for, add interest and encourage readers to dive deeper into the story.

As a writer, I have to…make it work.

For this feature story for the March 2015 issue, my vision was to create a more technical-style article on the metrics independent community pharmacy owners need to know to run their businesses better. The chief operating officer at PBA Health provided me with some background and a lot of numbers and formulas. I transformed those numbers and formulas into an infographic-inspired article that made sense with the magazine’s style and also showcased the technical information in an engaging way. This article ventured from my typical writing style, but I think that’s what I like about it so much.

As a writer, I have to…make it interesting.

For this short article for the June 2014 issue, I came up with the idea to highlight 10 numbers independent pharmacies might not know about their industry. Although I couldn’t envision exactly how the article would turn out, I wrote the copy in a way I knew the designers could have fun with. As a magazine writer, sometimes you need to think visually, too. Part of what I love about magazine writing is working with designers to bring words to life through great design. 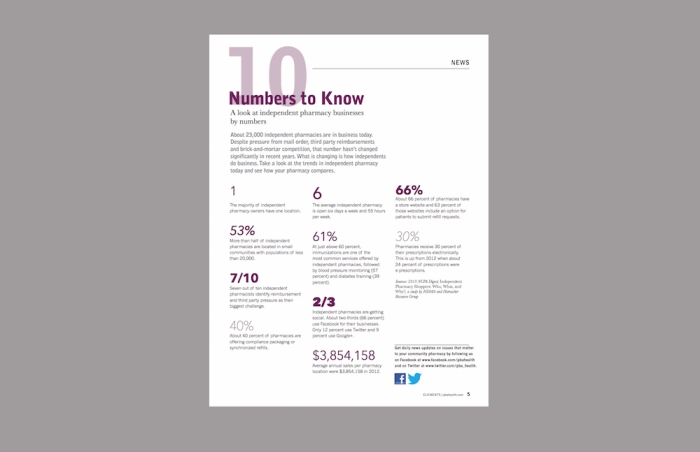