From February to May 2011, I worked as a staff writer intern for The Packer, a weekly business newspaper for the produce industry. As a staff writer intern, I fact checked and wrote articles based on press releases geared toward The Packer’s audience of retailer produce buyers, foodservice personnel and other members of the produce industry. I wrote multiple articles a day while on tight deadlines. I also wrote several in-depth articles for the newspaper’s Crops & Markets section. Below is a collection of the best articles I wrote for The Packer.

This article appeared in The Packer’s Crops & Markets section. It was the first in-depth story I wrote for The Packer.

This article about the green onion crop challenged my interview skills. My editors required me to interview at least three expert industry sources about a topic I had little knowledge of, as I’d just started my internship. The difficult part about interviewing for this article was asking the right questions to prompt engaging answers.

After I conducted the interviews I had to write the article to fit The Packer’s main audience of retail buyers in the produce industry. This was the first time I had written a story for a non-consumer publication.

The article turned out well. It hit all the points it was supposed to, including the quality of the crop, the current market for the crop and the crop volumes at that point in time.  I also managed to obtain three interviews. My editors also told me I did a good job explaining how exactly the weather damaged the crops instead of just saying it caused damage.

This article about the status on apple supplies in different regions of the United States appeared in The Packer’s Crops & Markets section.

My editors had only required me to obtain four sources, but I managed to interview sources at four top Washington apple companies and two apple officials.

Interviewing for this story helped me realize to not be afraid to ask questions if I didn’t understand something. Even though I felt embarrassed at my lack of knowledge sometimes, I asked whatever questions I needed to in order to understand the apple situation. Turns out all of the sources were more than happy to answer any of my questions. And the article benefited from it. The article did exactly what the assignment asked. It gave a detailed picture of the situation with the apple crop in New York, Michigan and Washington.

During my internship, I often had to rewrite press releases into articles.

When I received a press release for this article, I had to fish to find a story line. The title on the release was “East Coast Suppliers Finding Market for Broccoli,” but the release had a long introduction with extraneous and unsupported details and no clear story.

Once I did get to the meat of the information in the release, I found two different story ideas masked as one. The release talked about a seed company working to create new broccoli seed varieties and about a study at Cornell University to develop new broccoli varieties that were more tolerant to high heat and high humidity.

My editors wanted me to create a story out of this release, so I decided to go with the information on the seed company. After contacting the company, I filled in the informational holes left by the release, including the locations and dates of the trials, how many seed varieties the company planned to test and what specifically the company hoped to get out of the trials. I then crafted a story that gave information that could actually benefit The Packer’s readers. 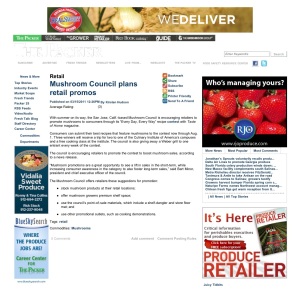 This article demonstrates my ability to identify a publication’s audience and to write to that audience. As a business newspaper, The Packer’s main audience consists of retail produce buyers, foodservice members, growers, shippers and others in the produce industry. The Packer’s audience is not consumers.

While the press release I received for this story attempted to focus on The Packer’s audience, it was more geared toward consumers. For example, the release stated:

“Retailers can take advantage of summer grilling season by promoting fresh mushrooms as a hearty and satisfying vegetarian option and encourage their customers to participate in the annual Every Day, Every Way mushroom recipe contest with Taste of Home magazine.”

The release, which was from the Mushroom Council, never explained how or why retailers should promote this competition. I contacted the press representative and got a quote and information about how specifically retailers could promote this contest to increase mushroom sales. If I hadn’t obtained this information, the story wouldn’t have benefited The Packer’s readers.

This article demonstrates my ability to construct a news story out of a promotional press release.

The press release I received for this article was about a construction company designing and constructing the expansion of a distribution warehouse. Written from the construction company’s point-of-view, the release contained promotional details about its company, but was missing information about the new facility.

See more clips of My Work.