I worked as a copy editor for the The University Daily Kansan, a student-run daily newspaper, for my advanced editing class at the University of Kansas during Spring 2010. I worked two shifts a week as a copy editor. During my shifts I edited news and sports stories, wrote headlines, decks and cutlines for print and the Web and uploaded stories to The Kansan’s website using a content management system. Below is a collection of clips of my work during that time as well as two multimedia clips I also completed for that class.

During Spring 2009 I worked for The Kansan as a correspondent. Also below are clips  that I wrote during that time.

This story was the best package that I edited during my semester as a copy editor. I tried to write separate headlines for this story that I thought went well in print and on the Web. The headline I wrote for the print version, “Chasing the Perfect Storm,” worked well with the feature-y story, while the headline I wrote for the Web, “Real Life Storm Chasers,” fit well online because the headline made sense even if readers couldn’t see the picture or a deck.

The copy had several major issues. When I received the story, it didn’t have a nut graf. So I worked with the reporter to write one that explained the purpose of the story and that helped make the story appeal to students. Also, the reporter tended to be wordy, so I tightened the writing, especially where quotes and the copy around them made the same point. I also added the subhead “Get Involved” to give that section of the story more clarity.

When I read the original lede for this story, I thought it was going to be a boring event story about a Latin American Food Festival. As I continued reading, though, I realized that the food festival was only part of the story. The larger issue was that the food festival was raising money to send a student group to Florida to participate in a freedom march for low-income farm workers.

First, I worked with the reporter to create a more engaging lede instead of the original, which was, “The Latin American Food Festival, hosted by KU Latin American Solidarity and Lawrence Fair Food, was held in the ECM Building on Thursday night.”

Then, I worked on reorganizing the story. This was tricky because the previous day’s issue of The Kansan had run a more in-depth story about the low-income farmworkers. I worked to reorganize the story so that readers who hadn’t read the previous day’s story would still understand what the group was doing, while still keeping the food festival as the main focus, but at the same time integrating the information to make the festival more interesting.

Before my semester as a copy editor for The Kansan, I had never read a single sports story. Because of my lack of sports knowledge I tended to have trouble writing headlines and decks for sports stories. For this story about the expectations for the men’s basketball team as the No. 1 seed, though, I thought I did good job with the kicker/headline combo. The headline, “Kansas Prepares for Tournament” fills the space perfectly and is to the point. I particularly like the play-on-words in the kicker, “Great Expectations.” The kicker also fits well with the light-hearted nature of the story.

Service Trips Help Students Give Back

When I received this story about alternative spring breaks it had two main issues: confusion throughout the first four paragraphs and a lack of a nut graf.

I then reworked the first four paragraphs for clarity. For example, originally the paragraph after the lede said, “Branch, a freshman from Topeka, rode with six other students to Denver.” I thought this sentence came completely out of the blue, so I cut this sentence and rewrote it into another paragraph with the point that I think the reporter was trying to make—that seven students participated in an alternative break at the Denver location.

Below are two multimedia projects I worked with groups to create for my advanced editing class.

For this project, my group and I were instructed to come up with a topic of interest to students at the University of Kansas that would lend itself well to the Web. After choosing quirky Kansas destinations for spring break trips as our topic, we researched destinations, located websites, videos and pictures to incorporate into the story and wrote short summaries of each destination. The graphic for the story was created by David Cawthon.

The idea for this video came about as a way to interest both basketball and non-basketball fans. It turned into an interesting look at the way our society views sports, and especially KU basketball. For this video my group and I interviewed student and expert sources, obtained photos and shot and edited video.

Below are two clips of my work as a correspondent for The Kansan and one clip from my multimedia reporting class.

I wrote this story about the recent increase of women in the field of broadcast meteorology for my multimedia reporting class in Fall 2008. Even though my writing has greatly improved since I wrote this story, I think it shows my willingness to do a lot of research for a story even as a young reporter. This story has five sources, but I interviewed seven. It also contains two secondary sources.

Questions Answered: Where is the best place to find a last-minute Halloween costume?

I wrote this lighthearted story about the best places to find last-minute Halloween costumes in Lawrence just for fun. I came up with the idea for the story a few days before Halloween, pitched the idea to the correspondent editor and then researched and wrote it in one day. When I wrote this story I had taken only two journalism classes and hadn’t realized that I wanted to write for magazines yet. I enjoyed researching this story and I think it shows an early aptitude for feature-like writing. 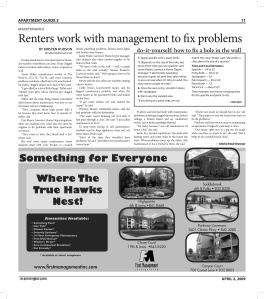 I wrote this story about common maintenance issues for renters for one of The Kansan’s Apartment Guides. My favorite part about this story is the break box, which explains how to fix a hole in the wall. Adding a picture or information graphic to a story always helps draw in readers. I camp up with the idea for this one as I was reporting and researching.

See more clips on the My Work page.